torchwood is a multi-media spin-off of doctor who. the tv series originally aired between 2006 and 2011, following a 'monster of the week' format for the first two seasons and then switching to a continuous storyline for the two next. it has more mature content than its parent show (it was described by russell t davies as being "more visceral, more violent, and more sexual") and is more grounded in reality thanks to its consistent modern setting.

the story follows the adventures of the cardiff-branch of the torchwood institute, a secret alien-hunting organisation. it mostly centers on captain jack harkness, the mysterious leader, and gwen cooper, the newest recruit and audience surrogate.

on this page you can adopt one or several members of the torchwood team to protect your website from alien threats!

- you can adopt as many of these as you want!
- save the images to your own server. do not hotlink.
- please link back to this page so other people can find these easily.
- edits of the images are totally okay, be it further resizing or recoloring or something else.
- you do not need to have watched torchwood to use these. i do not mind either way.
- this is entirely optional, but i'd love to see where you use these! you can leave a message on my guestbook to let me know.

- all images are 210 pixels tall. some have more blank space around them to account for height differences.
- all images belong to the BBC; i only made them transparent and smaller.

TOSHIKO SATO: tech specialist and computer genius. intelligent but insecure. reserved and unassuming, but more emotional than she lets on.

DOCTOR OWEN HARPER: medic. womaniser. rude and disrespectful. pretends not to care about anyone to hide his vulnerabilities.

IANTO JONES: general support officer. takes care of the catering, the dry-cleaning and the cover-up stories of various cases. a rather quiet and private man with a witty streak. loyal to a fault.

GWEN COOPER: torchwood's newest recruit. ex-police officer. her normal life and connection to the 'real world' give her a unique perspective on cases. very caring but very stubborn.

DOCTOR MARTHA JONES: medic. called to torchwood by jack to help on a case. intelligent and kind-hearted. knowledgeable and analytical. 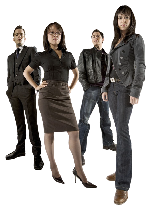 RHYS WILLIAMS: not a torchwood agent and doesnt want to be one. can cook, though.